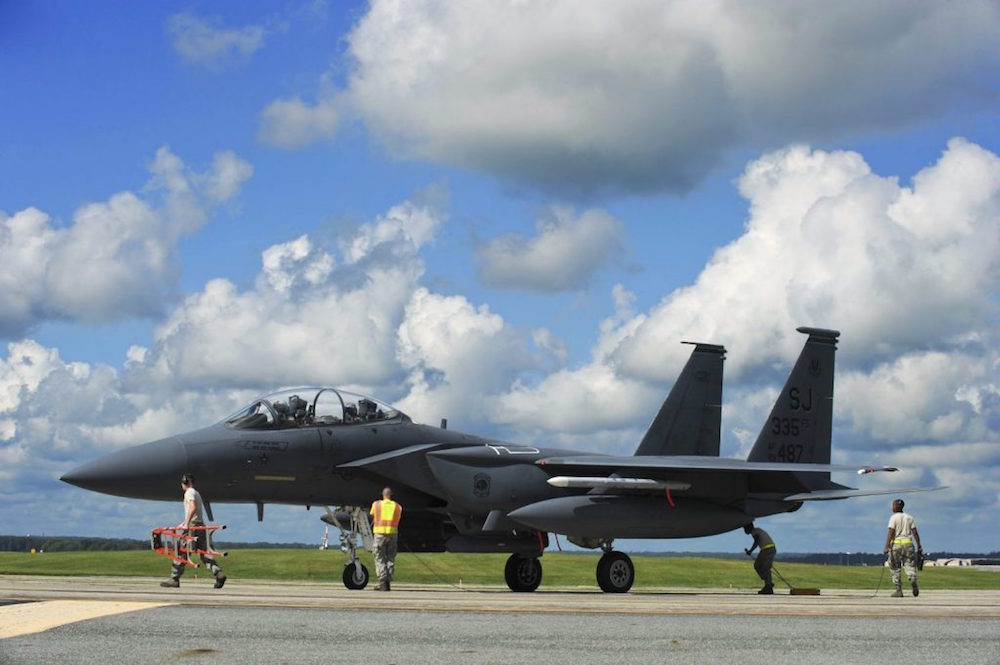 The F-15E Strike Eagle is a dual-role fighter designed to perform air-to-air and air-to-ground missions. An array of avionics and electronics systems gives the F-15E the capability to fight at low altitude, day or night, and in all weather. The aircraft uses two crew members, a pilot and a weapon systems officer. Previous models of the F-15 are assigned air-to-air roles; the “E” model is a dual-role fighter. It has the capability to fight its way to a target over long ranges, destroy enemy ground positions and fight its way out.

The F-15E is powered by two Pratt & Whitney F100-PW-220 or 229 engines that incorporate advanced digital technology for improved performance. For air-to-ground missions, the F-15E can carry most weapons in the Air Force inventory. It also can be armed with AIM-9M Sidewinders or AIM-120 advanced medium range air-to-air missiles, or AMRAAM for the air-to-air role. The “E” model also has an internally mounted 20mm gun that can carry up to 500 rounds.

The F-15’s superior maneuverability and acceleration are achieved through its high engine thrust-to-weight ratio and low-wing loading. It was the first U.S. operational aircraft whose engines’ thrust exceeded the plane’s loaded weight, permitting it to accelerate even while in vertical climb. Low-wing loading (the ratio of aircraft weight to its wing area) is a vital factor in maneuverability and, combined with the high thrust-to-weight ratio, enables the aircraft to turn tightly without losing airspeed.