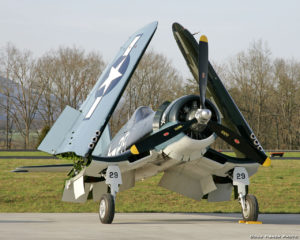 The Corsair played a major role as a U.S. WWII frontline combat aircraft. The F4U became well-known as the fighter of the famed Black Sheep squadron in the Pacific theatre. It’s distinctive “gull wing” and huge propeller with a 2,100 horsepower Pratt-Whitney radial engine behind it makes the Corsair a favorite among aviators and air show fans. The Corsair will be flown by experienced warbird pilot, Dave Folk.