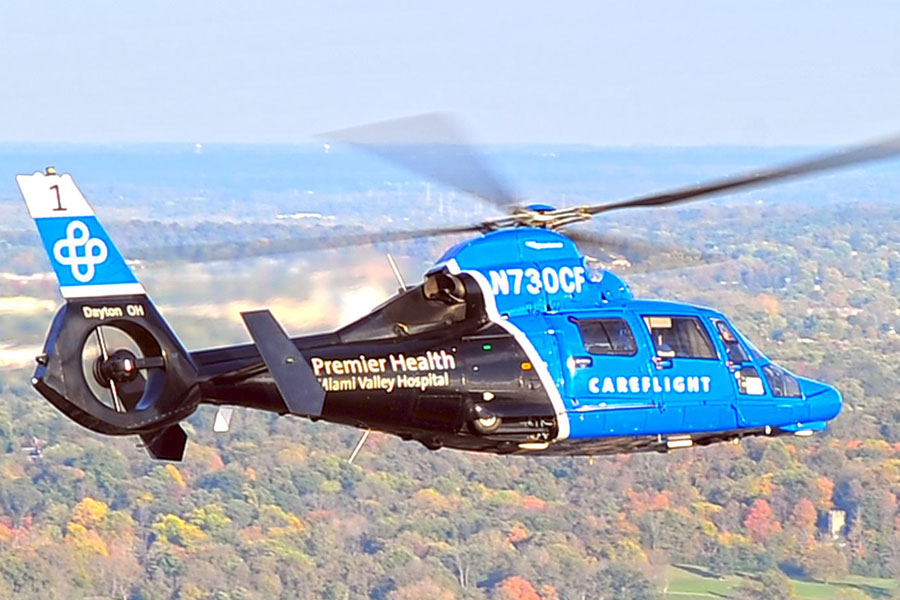 It’s a sound that many in the community have heard and know well: two Turbomecca jet engines gliding through the air at speeds of 180 miles per hour, transporting patients who need critical care. For 38 years, CareFlight Air and Mobile Services, Premier Health’s air-medical transport service and medical intensive care ground service, has saved thousands of lives in our region.

In 1983, CareFlight completed its first patient transport from St. Mary’s Ohio, and became the 65th air medical program in the country and the first in the region. At that time, CareFlight used a small single-engine aircraft with single-patient transport capability that traveled at speeds of 140 miles per hour.

As technology and safety evolved, so did CareFlight. The program upgraded to Dauphin aircrafts in 1988, providing the region with the fastest twin jet engine helicopters. Today, four Dauphin helicopters and five Mobile Intensive Care Units make up the program. Team members include pilots, mechanics, medical teams, and dispatchers.

Patients receive the highest level of care not only in the air with CareFlight but also upon arrival at Miami Valley Hospital, the region’s most experienced Level I Trauma Center. Patients transported by CareFlight are met with a Level I trauma team any time of the day or night and taken directly from the helicopter to the operating room, saving precious minutes when life hangs in the balance.

Technological advances in the 365N3 Dauphin include:

CareFlight Air and Mobile Services is proud to be the official air transport service of the CenterPoint Energy Dayton Air Show!