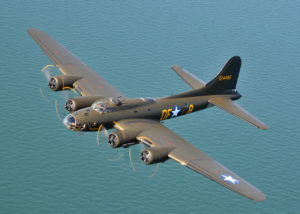 The B-17G Movie Memphis Belle that will appear at the 2018 show was the star of the 1990 Warner Brother film, Memphis Belle.  The film was a fictionalization of the 1943 documentary Memphis Belle, about the 25th and last mission of the American Boeing B-17 Memphis Belle Flying Fortress bomber.  The Movie Memphis Belle will commemorate this milestone and take spectators back in history giving them a chance to both see this iconic WWII heavy bomber fly and view it on display up close and personal in this anniversary year.